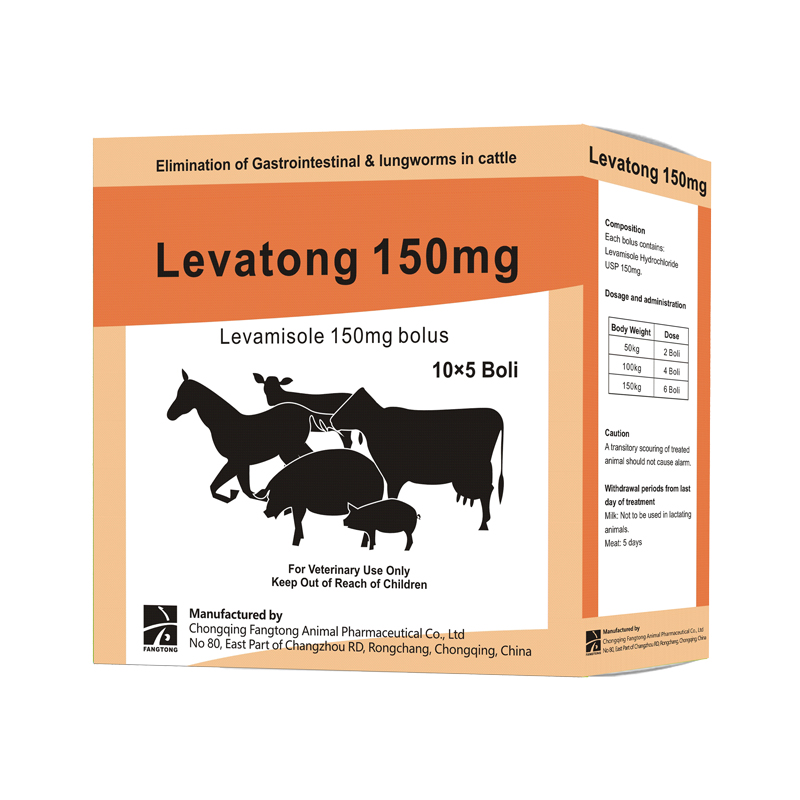 Composition
Each Dawasole-150 mg bolus contains Levamisole USP 150 mg.
Each Dawasole-600 mg bolus contains Levamisole USP 600 mg.
Each Dawasole-1 gm bolus contains Levamisole USP 1000 mg.
Pharmacology
Levamisole is an imidazothiazole that acts by interfering with parasite nerve transmission causing muscular paralysis. It stimulates the parasympathetic and sympathetic ganglia in susceptible worms. At higher levels, levamisole interferes with nematode carbohydrate metabolism by blocking fumarate reduction and succinate oxidation. The net effect is a paralyzing effect on the worm which is then expelled alive. Levamisole’s effects are considered to be nicotine-like in action.
Pharmacokinetics
Levamisole is absorbed from the gut after oral dosing and through the skin after dermal application, although bioavailabilities are variable. It is reportedly distributed throughout the body. Levamisole is primarily metabolized with less than 6% excreted unchanged in the urine. Plasma elimination half-lives have been determined for several veterinary species: Cattle 4-6 hours; Dogs 1.8-4 hours; and Swine 3.5-6.8 hours. Metabolites are excreted in both the urine (primarily) and feces.
Indications
Levamisole is indicated for the treatment of many nematodes in cattle, sheep & goats, swine, poultry. In sheep and cattle, levamisole has relatively good activity against abomasal nematodes, small intestinal nematodes (not particularly good against Strongyloides spp.), large intestinal nematodes (not Trichuris spp.), and lungworms. Adult forms of species that are usually covered by levamisole, include: Haemonchus spp., Trichostrongylus spp., Osteragia spp., Cooperia spp., Nematodirus spp., Bunostomum spp., Oesophagostomum spp., Chabertia spp., and Dictyocaulus vivapurus. Levamisole is less effective against the immature forms of these parasites and is generally ineffective in cattle (but not sheep) against arrested larval forms.
In swine, levamisole is indicated for the treatment of Ascaris suum, Oesophagostomum spp., Strongyloides, Stephanurus, and Metastrongylus.
Levamisole has been used in dogs as a microfilaricide to treat Dirofilaria immitis infection.
Contraindications/Precautions
Levamisole is contraindicated in lactating animals. It should be used cautiously, if at all, in animals that are severely debilitated, or have significant renal or hepatic impairment. Use cautiously or, preferably, delay use in cattle that are stressed due to vaccination, dehorning or castration.
There is no information regarding the safety of this drug in pregnant animals. Although levamisole is considered relatively safe to use in large animals that are pregnant, use only if the potential benefits outweigh the risks.
Adverse Effects/Warnings
Adverse effects that may be seen in cattle can include muzzle-foaming or hypersalivation, excitement or trembling, lip-licking and head shaking. These effects are generally noted with higher than recommended doses or if levamisole is used concomitantly with organophosphates. Symptoms generally subside within 2 hours. When injecting into cattle, swelling may occur at the injection site. This will usually abate in 7-14 days, but may be objectionable in animals that are close to slaughter.
In sheep, levamisole may cause a transient excitability in some animals after dosing. In goats, levamisole may cause depression, hyperesthesia and salivation.
In swine, levamisole may cause salivation or muzzle foaming. Swine infected with lungworms may develop coughing or vomiting.
Adverse effects that may be seen in dogs include GI disturbances (usually vomiting, diarrhea), neurotoxicity (panting, shaking, agitation or other behavioral changes), agranulocytosis, dyspnea, pulmonary edema, immune-mediated skin eruptions (erythroedema, erythema multiforme, toxic epidermal necrolysis) and lethargy.
Adverse effects seen in cats include hypersalivation, excitement, mydriasis and vomiting.
Dosage and Administration
For oral administration.
The general dosage is 5-7.5 mg Levamisole per kg bodyweight.
For more specific details relating to each bolus, see table below.