Understanding the knowledge and perceptions of veterinary students of antimicrobial resistance (AMR) as potential future prescribers of antimicrobials may serve as an opportunity to improve stewardship of AMR. Pre-final (n = 42) and final (n = 29) year veterinary students of the University of Pretoria completed questionnaires to determine their knowledge and perceptions of AMR. Of the 71 respondents, mixed practice (48%) and small animal practice (45%) were the most preferred career choices post-graduation, with the field of gross pathology being the least preferred. Over 80% of the respondents believed that veterinary practitioners’ misuse of antimicrobials contributes to AMR and a higher percentage (98.6%) believed that farmers’ misuse of antimicrobials encourages the development of AMR, in particular, in food animals (60.6%) compared to companion animals (50.7%). Agreement in the ranking of abuse of antimicrobials between pre-final and final year students was fair (36.4%; kappa 0.3), and the most abused antimicrobials in descending order listed by the students were tetracyclines, penicillins, sulphonamides and aminoglycosides. There was wide disparity between training and potential field application, as well as variations in the correct matching of antimicrobials to their respective antibiotic classes. Responses to the clinical application of antimicrobials also varied widely. Despite the apparent teaching of AMR to veterinary students, gaps may exist in the translation of theoretical concepts to clinical applications, hence the need for focused and targeted antimicrobial prescription and stewardship training to bridge these potential identified gaps.

Antimicrobial resistance (AMR) is a spreading and important public health concern globally (World Health Organization [WHO] 2001). In the tropics and particularly in many developing economies, the burden of animal and human infectious diseases is enormous. Coupled with weak veterinary infrastructures in many countries, deficient effective consultation and treatment, the inability to afford expensive drugs and the burden of counterfeit drugs have added to the disease burdens (Newton, Green & Fernández 2010; Schelling et al. 2005). To date, antimicrobials remain one of the most abused, overused and misused categories of medicine in the field of veterinary medicine and public health, and these have encouraged the development of AMR (Mehrotra, Dougherty & Poppe 2003). Between 2002 and 2004, the South African animal industry utilised 1 054 177 kg of in-feed, 190 400 kg of water-based and 269 794 kg of parenterally administered antimicrobials (Eagar, Swan & Van Vuuren 2012) and the trend is foreseen to increase with more intensification in the industry. In 2014, 2015 and 2016, a total of 23 333 808 kg, 23 857 579 kg and 22 205 520 kg of antibiotics were reportedly imported for use in the South African medical industry, veterinary industry and the private sector, respectively, while the public sector utilised 1 670 911 057 kg, 1 553 790 791 kg and 1 906 200 029 kg during the same period (Schellack et al. 2017). The resultant increase in the prevalence of antimicrobial-resistant organisms has influenced national and international efforts towards combating AMR development through planned reduction programmes for the use of antimicrobials (Harbarth et al. 2015). Currently, based on the efforts made globally, significant gains have been made, including but not limited to the use and misuse of antimicrobial agents as growth promoters: At least 110 of the 155 countries that responded to the questionnaires (71%) did not use any antimicrobial agents for growth promotion in animals in 2017, either with or without legislation or regulations. However, 45 countries (29%) still use antimicrobials for growth promotion, with regulations (18/45; 40%) and without a regulatory framework (27/45; 60%) (World Organisation for Animal Health 2018). Such efforts have included but are not limited to the global (and national) action plans and policies on AMR: the Global Antibiotic Resistance Partnership (GARP), Alliance for the Prudent Use of Antibiotics, European Antibiotic Awareness Day, Canadian Antimicrobial Resistance Alliance, European Antimicrobial Resistance Surveillance Network (EARS-Net), Joint Programming Initiative on Antimicrobial Resistance, Center for Disease Dynamics, Economics & PolicyGARP (CDDEP-GARP) and National Antimicrobial Resistance Monitoring System, among others. In South Africa, the South African Antimicrobial Resistance Strategic Framework has been produced, covering the period 2018–2024 to guide national actions on reducing the burden of AMR (Department of Health [DoH]; Department of Agriculture, Forestry and Fisheries [DAFF] 2018). In addition, increased attention has been focused on educating healthcare workers, and veterinary and medical students on the rational prescription of antimicrobials (antimicrobial stewardship) as a measure to reduce the burden of AMR (WHO 2012). While the medical, veterinary and other health professional curricula have been enhanced in developed countries (Abbo et al. 2013; Castro-Sanchez et al. 2016; Davenport, Davey & Ker 2005; Guardabassi & Prescott 2015; Heaton, Webb & Maxwell 2008; O’Shaughnessy et al. 2010; Ross & Maxwell 2012), such improvements in the developing economies seem to be lacking or non-reported. However, the training methods and contents of courses in the South African veterinary faculty are deemed adequate, but in view of the issues above, this study was aimed at assessing the knowledge and perceptions of veterinary students on AMR as future antimicrobial prescribers. It is expected that the outcome of the study will help review how the retention of knowledge can be enhanced to promote better antimicrobial stewardship. Materials and methods Study design This is a quantitative study designed to explore the level of knowledge (and retention thereof), and perception of AMR using questionnaires among pre-final and final year students at the Faculty of Veterinary Science, University of Pretoria. A standardised questionnaire was prepared and jointly reviewed by specialist veterinarians (a pharmacologist, poultry specialist, pig specialist, production animal specialist and microbiologist, all from the University of Pretoria). The questionnaire was pre-tested among 15 selected second-year veterinary students and adjusted appropriately (online Appendix 1).

Recruitment and selection of candidates

The study was conducted with 240 (total number of pre-final and final year) students of Veterinary Science at the Faculty of Veterinary Science, University of Pretoria (the only faculty offering Veterinary Science in South Africa) at the end of the 2014 academic session. Participation was voluntary and each student was allowed to withdraw during the course of the study. The inclusion criteria were for the students to have had the veterinary pharmacology and microbiology training during the preclinical or paraclinical years of veterinary training. Instructions were available to guide responses to the questionnaire, but each student was instructed to complete the questionnaire independently to prevent undue influence that may bias the outcome. Briefly, the degree of Bachelor of Veterinary Science (BVSc) in Pretoria recently underwent a revision from the old curriculum (BSc [veterinary biology] + BVSc, totalling 7 years). Basically, the newly admitted students spend the first year in the preliminary science courses and start a professional programme in the faculty from year 2. Courses include Medical Terminology, Animal Nutrition, Introductory Animal Production, Veterinary Professional Life and courses aimed at soft skills development as well as ethical and professional aspects of the veterinary profession. From the second year of study, basic veterinary disciplines in Anatomy, Histology, Microbiology and Physiology as well as modules in Animal Science, Pasture Science and Professional Life are taught. Courses in Infectious Diseases, Parasitology, Toxicology, Pharmacology, Organ Pathology and Professional Life are the main focus of year 3 to train the students in the causes and effects of disease. The students are exposed to diagnostics and therapeutics in the fourth year and the first semester of the fifth year and community engagement is also integrated. In the second semester of the fifth year, the emphasis primarily centres on the didactic components of the elective modules chosen by students. In the final (sixth) year of the study, students receive experiential training in the core and elective components in the academic hospital and in satellite and other approved facilities. These final year components enforce frequent revisiting of materials and training received in the earlier years of study.

Eleven antimicrobial agents were ranked according to their degree of abuse based on the students’ perceptions of these agents. Frequencies of assigned ranks (score 1–11) were determined and entered into a Microsoft Excel spreadsheet (Redmond, WA, United States [US]). The score ranking of each antibiotic was determined as the antimicrobial with the highest students’ perception frequency for that score; and where two antimicrobial agents had the same frequency, they were ranked equally and assigned the same score.

As no invasive procedure was requested and no sampling of any human or animal was required, no specific ethical approval was obtained. However, each student signed the consent form to participate and reserved the right to withdraw during any part of the study. Approvals to conduct the study were granted through the project number 2013/05 (Open Access Learning in Stewardship of Antimicrobials) and the 2013/2014 SA Department of Higher Education and Training (DHET) Scholarship of Teaching and Learning (perception of veterinary students in South Africa on antimicrobial administration in intensive animal production).

Only 109 of the 240 questionnaires handed out to students were returned (response rate: 45%) with only 71 (29.6%) consisting of 42 (59.15%) pre-final and 29 (40.84%) final year students deemed appropriate for further analysis. Of the participating respondents, 52 (73.2%) were women, while only 19 (26.8%) were men (Table 1). Mixed practice (48%) and small animal practice (45%) were the most preferred career choices post-graduation, with gross pathology being the least preferred. Pharmaceutical industry, laboratory medicine or clinical pathology and education fields were minimally subscribed, while six (8.5%) were undecided and five (7.0%) subscribed to other choices (Table 1). Previous knowledge may have influenced or biased the responses of 10% of the students with previous degrees in pharmacology, biological research, microbiology or pharmacy (data not shown, Table 1).

Impressively, South African veterinary students expressed confidence in their overall knowledge of antimicrobials (mean score of 1.8 ± 0.8), especially with regard to differentiating between time- and concentration-dependent antimicrobials(p ≤ 0.0001), interpreting the antibiogram (p ≤ 0.0001) and choosing the most ideal route for administering a specific antimicrobial (p ≤ 0.04) (Table 3). Conversely, student responders were significantly unsure, vague or had no idea of: (1) the spectrum, effect, distribution, indications, side effects and contraindications of the most commonly used antimicrobial classes in veterinary medicine, (2) resistance mechanisms, (3) choosing the desired time frame for therapy, (4) choosing an alternative if the first choice of antimicrobial therapy failed and (5) the design of an integrated treatment protocol for a specific animal with an infection which includes supportive therapy (Table 3).Generally, the agreement in ranking of the degree of abuse of antimicrobials based on students’ perception between pre-final and final year students was fair (36.4%; kappa 0.3). Tetracyclines, penicillins, sulphonamides and aminoglycosides were considered the most abused antimicrobials in descending order, while the polypeptides, cephalosporins and formulations of combined antimicrobials were the least abused (Table 4). There was a wide variation (range: 38% – 96%) in the correct matching of individual antibiotics with their corresponding antibiotics class, with correct matching of penicillin (39.4%) and macrolide (38.0%) groups being the lowest, while peptide antibiotics (95.8%), aminoglycosides (94.4%) and beta-lactams (80.3%) were the medicines most frequently correctly matched (Table 5). Furthermore, correct responses to specific questions on the clinical application of antimicrobials varied widely (range 15.5% – 73.2%, Figure 1). 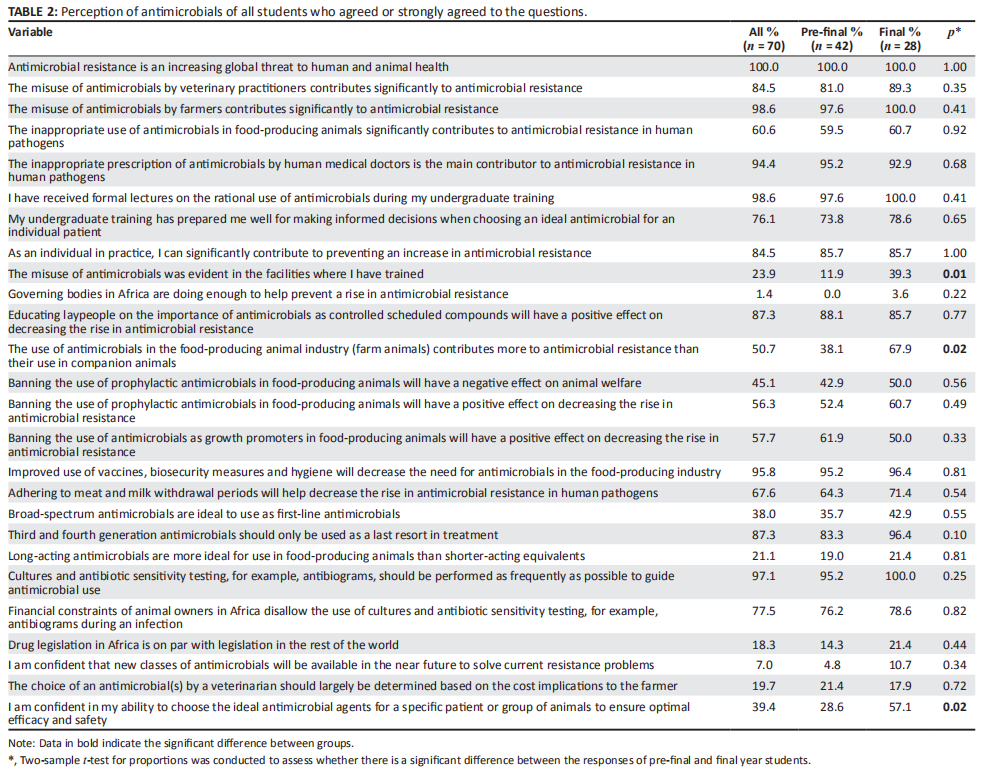 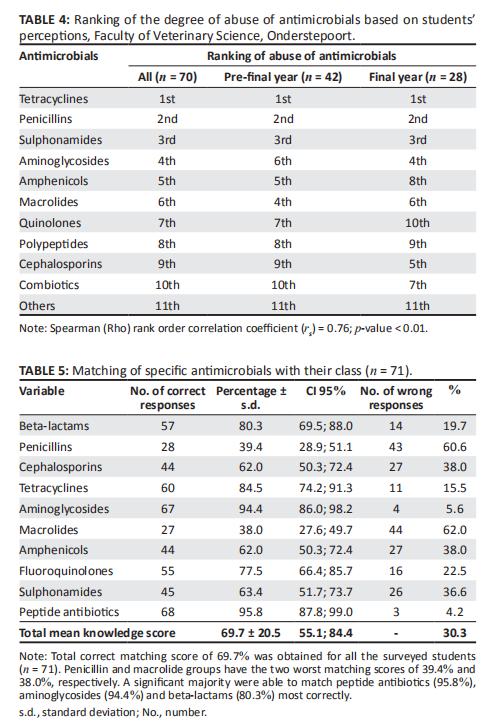 The rapidity with which AMR is developing and spreading in animals has attained a public health emergency or epidemic proportion as agreed by all participants in this study. Most respondents intended to pursue a post-graduation career in mixed and small animal practices, thereby suggesting a high likelihood that they will be responsible for prescribing antimicrobial agents in the future. However, a significant gap existed between their current levels of knowledge and the knowledge required for the prescription of antimicrobials. 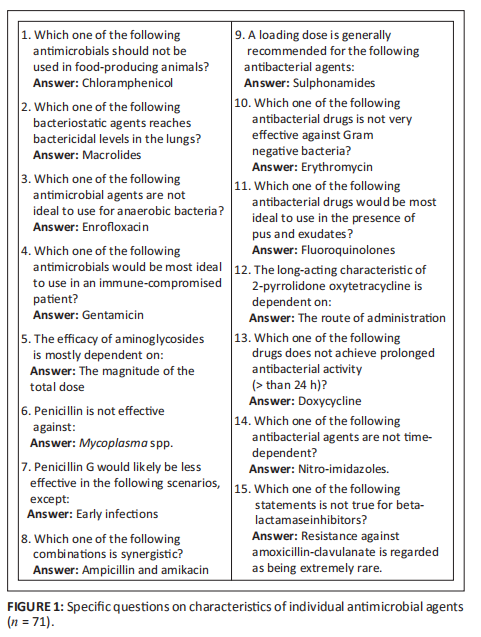 The authors acknowledge the contribution of Prof. Stephanie G. Burton and Prof. Wendy Kilfoil and their teams for approving the project and Prof. Gerry Swan, Prof. Peter Thompson and Prof. Geoff Fosgate as well as E. Mostert for value addition to the proposal.

The authors have declared that no competing interests exist.

Data are available as supplementary material online or with the University of Pretoria.

The views and opinions expressed in this article are those of the authors and do not necessarily reflect the official policy or position of any affiliated agencies of the authors.